On March 27 1911 Josiah Wilkins, an engineer from Blackburn, submitted a patent application for an automatic tea making appliance, GB191107570DA. The application was published on 14th December 1911.

Tea, apparatus for making. An automatic tea-making appliance is fitted with means whereby the amount of water used may be varied and also with illuminating-means ignited at the same time as the heating-burner. The apparatus is controlled by an alarm clock which is placed on the shelf 23 so as to make electric contact with a stud 24 and is provided with an arm adapted, when released by the alarm mechanism, to turn on the gas-cock 29 and make contact with the contact-plate 33 to ring an electric bell 22, which continues to ring until the switch 32 is opened. The illuminating- burner 25 and heating-burner 12 are ignited by valve-controlled by-pass burners 26, 13, and are controlled by separate valves 27, 14. The valve 14 is normally held open against the action of a spring 16 by a pivoted catch 5 adapted to be released by the weight of water in the vessel 60 acting through a sliding member 11 and link 4 against the action of an adjustably weighted arm 6. The kettle 18 is provided with a filling-stopper 19 provided with a small hole so that, when the water boils, the steam pressure automatically discharges the water into the vessel 60, which causes the weighted arm 6 to make electric contact with a contact-plate 10 and again ring the bell.

invention, and in what manner the same is to lie performed. I declare that what I claim is:=-.

(1). In an automatic tea-making appliance of the type described the use of a movable weight on the counter balance arm so that the quantity .of water discharged may be varied.

(2). In apparatus as claimed in Claim 1, the use of an illuminating gas burner automatically lighted at the same time as the heating burner.

(3). The combined automatic tea-making, illuminating and alarm device as described with reference to the accompanying drawings. 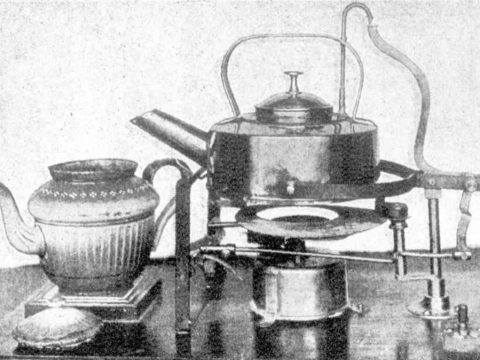